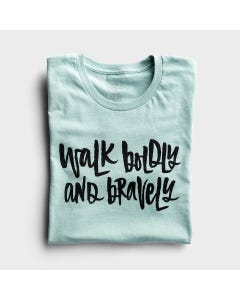 Ways to Be Brave This Year

Bravery is a tough call: it requires trusting God and stepping out in faith, even when doing it pushes you outside your comfort zone—as being courageous so often does. Knowing that God is in control can help you take that next step in life, in your career, in your spiritual journey—however the next step looks for you.

Being Brave Is Uncomfortable

This idea may seem obvious, but is worth underscoring: being brave in your life is nothing if not uncomfortable. The Bible gives us only a small window into the life of Lydia, for example, a successful business owner in the male-dominated Roman Empire. A dealer of purple cloth in Thyatira, Lydia was not unique in her trade, but certainly a pioneer in her personal life. And although little is known about her family and household, we do know she was willing to take in Paul and Silas after they had been jailed, that she made the leap of faith to embrace Christianity, and that her house may have served as a center for Christian work—each of these decisions risky on her part, but also part and parcel of the entrepreneurial spirit she surely possessed. If you’re starting a new venture in the new year, draw inspiration from Lydia and other courageous women like her.

Bravery Is an Exercise of Your Faith in God

These two ideas are inextricably bound: being brave requires faith, and having faith requires bravery. What does the Bible urge us to do, again and again, in the face of fear? To trust in the Lord. God gave every man and woman the capacity for bravery. But true Godly bravery means living out life according to what God alone tells us. This means putting our faith in God, and putting His plans for us first, above all other plans—including wife, mother, or professional. Hear your own call to God in 2021, and trust that He will help show you the way.

Bravery Is Not Always Complicated

Bravery may not look heroic at all, like skydiving or moving to another country: it may be simply standing up for what you believe in. Or even getting up early to tackle your day’s list—it’s certainly not glamorous, but still courageous. Or bravery may be silent—just showing up, for example, or waiting. True bravery can look a lot like staying right where you are, even in the face of unpleasantness. Jesus gives us a glowing example of this, staying where he was after Judas betrayed him, and in spite of knowing what would soon unfold. Be there. Follow your faith. This uncomplicated kind of bravery may finally be what’s most needed in our world today.

Bravery Is Not About Self, But About Walking with God

Rest in God’s presence. Again and again in Scripture, God comforts the fearful by saying I am with you. He does not lift their spirits by praising their strengths, but instead by reminding them of His. In this way, being brave in your life is not so much about yourself as it is about God. It is a call to step out in your Christian faith in the face of uncertainty, instead of merely believing you can do something.

“Be strong and courageous. Do not be afraid or terrified because of them, for the Lord your God goes with you; he will never leave you nor forsake you.” (Deuteronomy 31:6)

Your own version of brave probably does not look the same as anybody else’s. Each of us has strengths and weaknesses, unique talents and gifts. What requires an act of bravery on your part may seem like nothing to your friend or neighbor. Being courageous is not about seeking sameness but simply about seeking, however that looks, even if the idea of seeking is scary. It’s also about pushing away envy and jealousy over things that have nothing to do with you: that exercise requires you to be brave with your life. Trust in God, as Peter did when he stepped out of the boat and into the water: He will take care of you.

“Be of good courage, and he shall strengthen your heart, all ye that hope in the Lord.” (Psalm 31:24)

Three Strategies for Finding Your Own Bravery and Courage in 2020

1. Start small. Part of being a Christian in fact is understanding you do not walk alone, but are connected to others through the invisible hand of God: when one person shares courage, the collective courage of a group grows through that singular act of faith. Bravery begins right where each of us is.

3. Turn to Scripture. Start 2021 with biblical inspiration from brave women who have gone before you. Esther delivered her nation from destruction and death; her story is one of God’s enduring love and supremacy in all situations, a post-exile story about the Jews who stayed behind when most returned to Jerusalem after captivity. Because of her fortuitous position as the Queen of Persia, she is able to influence King Ahasuerus and divert a jealous plot by the high royal official Haman to destroy the Jews, after Esther’s guardian Mordecai refuses to pay homage to him. In an act of faith and courage Esther bends the ear of the king and in so doing saves the Jewish people.

Fear is the limiting factor to taking risks: fear of ridicule, of failure, and of hurt—physical and emotional pain inflicted on the self, and even unintentionally on loved ones during an act of courage. But when one brave woman steps outside her comfort zone, she paves the way for others to follow her. An act of courage is a bold move forward that can make life uncomfortable, if only for a while, for anybody who undertakes it—but it is a move forward. Let your own story in the new year be a shining example of bravery, however small, and of God’s providence and care for His believers.