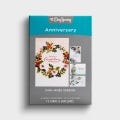 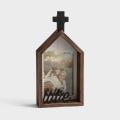 You’ve probably heard about the different traditional gift “themes” that represent each year of a wedding anniversary. You might even know a few of the most popular traditional anniversary gift themes offhand, such as silver for your 25th anniversary, rubies for your 40th, and gold for your 50th. But, have you ever known anyone who actually followed it? I’ve always loved the way my friend, Kristen, and her husband give each other traditional gifts on their anniversary—on their first anniversary he gave her a Bible with her married name on it, the second year he bought her a cotton dress to wear for their anniversary dinner. For their third anniversary, Kristen bought him a nice leather journal and she sent him an edible fruit arrangement for their fourth. After 15 years of traditional anniversary gifts, they’re still going strong—and each year they have so much fun picking out a gift for one another. While the anniversary gift list provides a general gift theme for each year, they always have fun being creative and end up giving each other really meaningful and memorable gifts.

If you’re stumped and looking to find an anniversary gift that’s truly meaningful, we’ve got you covered! We’ve compiled what we call The Ultimate Year-by-Year Anniversary Gift List just for you. Wishing you a happy anniversary—and many more!

Buy a great marriage book or journal. Take time to sit down and write down some of the amazing, wonderful things about being together.

If you’re crafty, start a patchwork cotton quilt together made of your clothing. Add a square each year. One day it will be a great family heirloom.

Buy your spouse an article of clothing.

Buy a leather-bound Bible and try to read through it together before your next anniversary.

Go to your local ethnic market to find exotic fruits to try together.

Dip some strawberries in chocolate—yum!

Our wall decor is the sweetest!

Buy some wood and build something together.

Chocolate is always a good idea.

Give your spouse a nice wool sweater.

Buy your spouse a copper key chain and have it engraved.

Go to a pottery studio and create a piece together.

Give your spouse the Mr. and Mrs. Gift set—complete with mugs!

Gift her a beautiful piece of jewelry.

Plant a weeping willow tree together.

Fill a cookie tin with memorabilia from your first 10 years of marriage.

Get your spouse a stainless steel travel mug and have it personalized to read “Best Wife Ever”/ “Best Husband Ever.”

Get these cute linen hand towels for your bathroom.

Make a batch of Oatmeal LACE cookies for your husband.

Splurge on a piece of beautiful antique lace.

Order a small cake from your local bakery and have it decorated with gold.

Buy her a piece from the DaySpring Jewelry collection.

Order a crystal paperweight and have it personalized with a sweet or funny message.

Make a coffee date with your spouse and present them with a faith-filled mug.

Wake him or her for an early morning tea time.

Write a wish or “toast” to your spouse and put it in a frame. When they see it each day, it will be such a nice daily affirmation of your love.

Buy your spouse a really great coffee maker or another gadget you know they will enjoy.

Buy your spouse a jade plant for their desk.

Husbands, buy your wife a piece of jade jewelry

This is referring to dishware, but why not do something more adventuresome for your 20th?

It’s a little unconventional, but take a trip to a large city and visit a China town—enjoy the people, food, and the culture.

Don’t forget to buy a souvenir!

Surprise your spouse with a candle-lit dinner; afterwards, light a Chinese lantern and send it up in the sky.

Get out on the water in a canoe, eat at a restaurant on the water, buy an outdoor fountain to enjoy together.

Have a huge balloon bouquet delivered to your spouse or buy a bunch at your local grocery store.

Get a couple’s hot stone massage.

Does your spouse enjoy gardening? Add some garden stones to his or her masterpiece.

Give your spouse a special keepsake necklace. We have beautiful options from Tim & Demi Tebow to help you Live Your Faith.

Have a local artist paint a picture of you two.

Get tickets to a concert.

Decorate with lyrics from his or her favorite worship song with our Lyrics for Life wall décor.

Have fun redecorating your room or bathroom together.

With its pearl charm, this Faith, Hope, and Love Necklace is perfect.

Take your husband out for oysters…hope you find a pearl in one of the shells!

Take turns planning a couple fun weekend getaways over the course of year 31.

Get a bronze door knocker engraved with your last name.

Gift her a beautiful piece of bronze jewelry.

Wives, get your husband a monogrammed branding iron for the grill.

Husbands, buy your wife a beautiful monogram of your last name.

Take a cooking class together.

Surprise your spouse with a trip to a restaurant they have wanted to try…but haven’t yet.

Cook your spouse’s favorite dinner as a nice surprise.

Buy a piece of coral-colored clothing or jewelry for your spouse.

Go to a flea market or antique store together and buy a piece together.

Read a book together - DaySpring has a large collection to choose from.

38th Anniversary - Blessings (some lists call this one luck)

Create a list of all the many ways God has blessed you through your sweetheart.

Surprise your spouse with little “blessings” throughout the year…

Write your spouse an anniversary card reliving all the funny memories you shared over the years.

Make it a date—surprise your spouse by bringing home takeout and a funny movie to watch together.

Take an Autumn trip to the Appalachian Mountains and visit Ruby Falls in Chattanooga, Tennessee.

Have your spouse’s office redecorated or get them a comfortable new desk chair.

Have some photos taken of the two of you and frame them for the office.

A clock is a timely reminder after 42 years (sorry, bad pun!).

Give your spouse tickets to a sporting event or concert.

If your spouse has been wanting to take up a new hobby, gift them with the necessary supplies.

Buy your spouse an electronic picture frame and fill it with pictures of the two of you over the years.

Take your spouse to an electronics store and see what catches their eye—then surprise them by buying it for them.

Buy your spouse something sapphire blue.

Rent a sapphire blue convertible for the day and go cruising!

Gift your spouse with a new game that requires only two players or break out some games that have been sitting on the shelf for years.

Make game night a part of your weekly routine.

Have your local plant nursery come spruce up your beds.

Find an older couple (maybe from your church) who are no longer able to garden—bless them with a beautiful potted arrangement that’s easy to care for and thank them for being a wonderful example of lasting commitment.

Find a family in need of a repair to their home and offer to pay for the work to be done.

Create a romantic atmosphere with string lights made from copper wire.

Have a one-of-a-kind jewelry piece made from copper, and have her initials engraved on it.

CELEBRATE!!! Have a 50th anniversary party, maybe renew your vows, and consider going back to the area where you had your honeymoon.

Gift your spouse with a photo album full of photos from your life together and take a stroll down memory lane.

Gift your spouse with some nice lotions, body wash, and perfume or cologne.

Consider getting a couple’s massage at a local spa.

Give each other gift cards (they’re made of plastic!) and go out shopping together.

An item like these beautiful candles in glass jars would be the perfect gift for 54 years.

Buy your spouse something emerald green!

Have your spouse write down what they would do on their perfect day…and then make it happen!

Have a moonlit picnic and do some stargazing with your sweetheart.

Surprise your spouse with breakfast in bed served on this wood serving tray.

Make a weekly date to volunteer together at your church, the local hospital, or a local school.

Take your spouse to a baseball DIAMOND and watch a game.

Remember: while it’s fun to look at themes and come up with fresh, new ideas on how to celebrate wedding anniversaries, let’s not forget to celebrate marriages all year round. Let’s lift up our spouses daily through prayer, encouraging words and thoughtful actions.