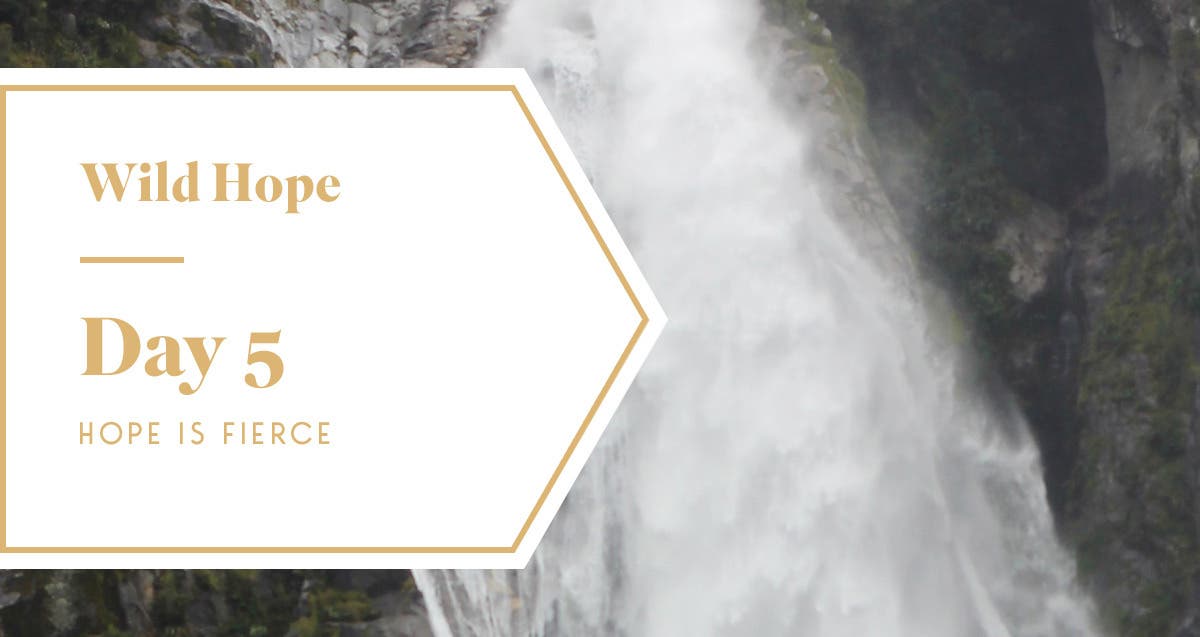 I pray that from His glorious, unlimited resources He will empower you with inner strength through His Spirit (Ephesians 3:16).

God is a safe place to hide, ready to help when we need Him. We stand fearless at the cliff-edge of doom, courageous in sea storm and earthquake, before the rush and roar of oceans, the tremors that shift mountains... God fights for us, God-of-Angel-Armies protects us (Psalm 46:1-3 THE MESSAGE).

So be strong and courageous! Do not be afraid and do not panic before them. For the LORD your God will personally go ahead of you. He will neither fail you nor abandon you (Deuteronomy 31:6).

Generation after generation stands in awe of Your work; each one tells stories of Your mighty acts (Psalm 145:4 THE MESSAGE).

I've mentioned that as a public figure, I've been blessed with a platform that has given me many opportunities to share my faith with others, to point them to Jesus, who means everything to me. I'm grateful that in interviews and on social media, I often get a chance to offer a Christian perspective or take a stand on important issues.

It isn't always easy. I don't always do it perfectly. But I try my best to honor God in every situation. Sometimes the response is really positive! Sometimes it's not. Over the years I've gotten plenty of negative feedback, criticism, and ridicule. Taking a stand has cost me some friendships. It's cost me in my career. Yet I know these sacrifices have been so small compared to those that others have been called to make.

I guess that's why one of my favorite stories in all of Scripture is the story of Esther. Esther was an orphaned Jewish girl miraculously chosen to be queen of Babylon. When she learned of a plot to annihilate all the Jewish people living in the empire, she was challenged to stand up and speak out-to approach her notoriously temperamental husband, the king, and ask for his help. But appearing before him without an invitation literally could have cost her life.

Esther's story gives me hope because she had hope-even in the most impossible, the most overwhelming circumstances. She had faith to believe that God could-and would-come to her rescue, that He would deliver her and her people.

That hope made her fierce. It made her bold-strong and courageous-willing to put her own life on the line for others. Willing to sacrifice herself, if necessary. Hope led her to pray ­fervently, passionately, persistently. And God answered her prayers.

He gave Esther supernatural wisdom and discernment to carefully navigate an incredibly difficult situation. He showed her how and when to stand up and speak out. He gave her favor with the king. He saved her and all her people with her.

And the most amazing thing? The same God who filled Esther with fierce hope and courageous faith is with you and me today. Wherever and whenever He calls us to take a stand, He stands with us. He gives us the words to speak. He leads us and guides us, protects us and defends us. He answers our prayers.

We live in hope because we know that our lives are in His hands.

Related Articles
2 Comment(s)
Rita Marsh
Jan 09, 2023 18:05
I love this now what???
Reply
Frank Mackay Anim-Appiah
Nov 27, 2022 15:51
Many thanks for your five encouraging articles on Hope which I find very useful. These are resources that I would in turn share with others.
Reply